Welcome to the programmatic area on safe motherhood within MEASURE Evaluation’s Family Planning and Reproductive Health Indicators Database. Safe motherhood is one of the subareas found in the women’s health part of the sexual and reproductive health (RH) section of the database. All indicators for this area include a definition, data requirements, data source(s), purpose, issues and—if relevant—gender implications.

Although safe motherhood has remained high on the political agenda, the scope of what constitutes “safer” motherhood has changed considerably. A major factor has been the incorporation of a human rights approach into the definition of Safe Motherhood following the agenda set at the International Conference on Population and Development (ICPD). By defining maternal death as social injustice, programs for “Safer Motherhood” are able to invoke a much broader range of political, social, and economic initiatives than was previously possible (UNFPA et al., 1997).

Policies and strategies to achieve safe motherhood have also changed as knowledge and understanding about the determinants of maternal health have become clearer.  In the Initiative’s early years, the focus was on maternal death as a result of poor or inaccessible medical care.  But then recognition was given to the range of direct and indirect problems that contribute to poor maternal health: lack of education for girls; early marriage; lack of access to contraception; poor nutrition; and women’s low social, economic, and legal status (Starrs, 2006).

Over the past two decades, many other new priorities and challenges have also emerged that need to be addressed under the safe motherhood umbrella. Foremost among these is the HIV/AIDS pandemic, which continues to have a disproportionate impact on women and girls.  Another major development is the increasing focus on newborn care. Awareness that relatively simple interventions both before and after birth may substantially reduce the estimated eight million perinatal and neonatal deaths has given rise to many more programs that target improving newborn survival.

Several different models or frameworks exist to help program managers and communities understand the determinants of maternal mortality (Campbell et al., 1997; McCarthy and Maine, 1992; Thaddeus and Maine, 1994; Koblinsky et al., 2000). The “Three Delays Model” identifies the points at which delays can occur in the management of obstetric complications at the community and facility level.

The first “delay” (delay in deciding to seek care) may relate to a number of factors, including the lack of knowledge about obstetric danger signs, community perception of poor quality facility care, or the lack of health services availability which increases the opportunity costs and therefore reduces the likelihood of care seeking.

The second “delay” (delay in identifying and reaching a medical facility) relates to the geographical proximity and accessibility of health services, and includes factors such as the availability of transportation.

The third “delay” (delay in receiving appropriate care at health facilities) is related to factors in the health facility, including the availability of staff, equipment, and resources as well as the quality and (in some cases) the cost of services. 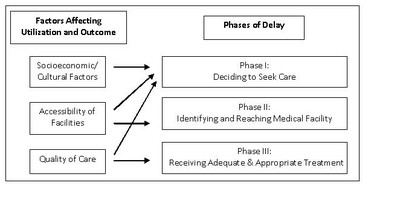 In addition to the changes in the definition, policies, and strategies as well as the emergence of new public health problems that drive the need for an increasingly wide range of indicators, monitoring and evaluating safe motherhood programs pose a number of inherent methodological challenges. These include, but are not limited to, the following issues.

Maternal mortality estimates are valuable and particularly relevant now due to the need to evaluate MDG-5, improve maternal health.  Mortality estimates do, however, have a number of inherent methodological weaknesses that limit their use for monitoring purposes; they are costly, they do not explain the causes of maternal deaths, and they cannot detect short term change (Graham et al., 2008).

Few developing countries have registration systems with sufficiently wide coverage to provide accurate national estimates of maternal mortality. Alternative approaches to deriving estimates, such as surveys and the sisterhood method, also have limitations in that the estimates are relatively imprecise and relate to periods several years before the survey. Even in countries where the maternal mortality is high, maternal deaths are rare events; therefore, surveys are very costly because of the need for large sample sizes to provide a statistically reliable estimate. The wide confidence limits on the estimate also make it very difficult, if not impossible, to assess whether change has occurred over time. For these reasons, maternal mortality estimates, if required, should be measured only infrequently (e.g., once a decade), and program-level indicators that measure the availability, use, and quality of care are recommended for monitoring purposes (AbouZahr, 1999).

Maternal morbidity is much more common than maternal death; thus, the prevalence of maternal morbidity provides a conceptually appealing alternative outcome to measure. Moreover, relatively little is known about the burden of reproductive morbidity; more work is needed to explore the dimensions and determinants of the problem as well as to evaluate the effectiveness of interventions.

The link between morbidity and mortality is not straightforward.  Safe motherhood interventions primarily offer secondary prevention; that is, they prevent deaths from complications rather than preventing the complications themselves. Furthermore, unlike death, which has a very defined outcome, measures of morbidity are difficult to define and thus to measure. Even persons with medical training may misclassify complications; consequently, generating any meaningful comparative measures is difficult (Fortney and Smith, 1999).

Under most circumstances interventions that benefit or harm the mother similarly affect the baby and vice versa. Some exceptions are notable. For example, a cesarean section for fetal distress may be critical to ensure a good neonatal outcome but may more negatively influence the mother’s health than a normal vaginal delivery will.

Unlike most areas of public health, providing appropriate maternity care is a complex process that involves a wide range of preventive, curative, and emergency services as well as several different levels of care (from the community to the facility and beyond).  The occurrence of an emergency sets into motion a complex chain of events to ensure that a woman receives adequate care. First, the family needs to recognize the problem and be able to access the appropriate services.  Second, the equipment, supplies and medicines must be available at the facility to enable the care provider to make the correct diagnosis and to provide appropriate treatment promptly. If definitive care cannot be provided at the first level, then transport needs to be available quickly to take the woman to a higher level of care that must also deliver the appropriate services. Problems at any one of these stages may mean that the woman receives substandard care, which may be of critical importance in determining the outcome. From a program perspective, a series of indicators is required to reveal whether a problem occurs on the “demand” or “supply” side of the equation, and hence, whether the interventions need to address community mobilization, behavior change, health system performance, or a combination of these factors.

Demonstrating change as a result of a safe motherhood program is difficult because programs usually provide a package of care to communities rather than providing one single intervention. Therefore, such programs do not lend themselves easily to randomized control trials or cluster randomized community-based trials. Many programs adopt “before-after” designs for evaluation purposes that can demonstrate “plausible association” but that fall short of determining causality (UNFPA et al., 1997).

The indicators in this section are intended mainly for use at the national level or in the context of large-scale programs. However, many can serve in a much wider monitoring and evaluation context. These indicators were selected on the basis that they:

Not all indicators included in this section are equally strong or provide the same quality of information. Certain indicators (for example, Percent of pregnant women attending antenatal clinics screened for syphilis) are included because of the potential importance of the information, even though the feasibility of collecting valid information at a national level may be low. At least one indicator is included to represent each element of the proposed safe motherhood framework, and under some headings, no “strong” indicators were available. In addition, the program-level indicators are included because they are now used rather widely, and they provide useful information about local planning and decision-making. However, several are clearly not intended for national level use.

The indicators included in this section focus on a rather narrow definition of safe motherhood.  To address related issues of STIs/HIV/AIDS, Women’s Nutrition, Cervical Cancer, Obsteric Fistula, etc., users are encouraged to look at those indicators in their respective sections. Priority is given to core indicators currently in use to monitor safe motherhood programs and those most closely related to maternal outcome.  However, programs need to develop their own set of indicators according to the objectives of the program and the interventions designed to achieve those objectives.

UNFPA, UNICEF, The World Bank, WHO, IPPF, and The Population Council.  1997.  The Safe Motherhood Action Agenda: Priorities for the Next Decade. Report on the Safe Motherhood Technical Consultation.  October 18-23.