The median age in years (which is an interpolated calculation) of women at birth of first child. Coverage includes women of all marital statuses.

For each single age group category, evaluators determine what percent have already given birth by calculating:

Once the percentages have been calculated within specific age group categories, medians are calculated from accumulated single year of age percent distributions of age of woman at first birth.  The median is linearly interpolated between the age values by which 50 percent or more of the women had a first birth. 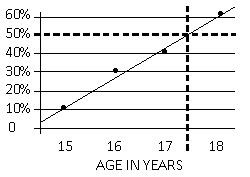 In this illustration, the interpolated calculated median by which 50 percent or more of the women surveyed had already given birth is roughly 17.5, which when rounded up to the next completed year of age, is 18 years of age.

Woman’s age, in years, at the time of birth of her firstborn

Many family planning (FP) programs are interested in not just addressing unmet need for FP and promoting child spacing, but also delaying first birth because of the negative consequences of early birth on maternal and child health outcomes as well as women’s status and empowerment.  More than 40 percent of adolescent women in the developing world — the large majority of them married — will give birth before the age of 20 (Alauddin and MacLaren, 1999). When pregnancy occurs before adolescents are fully developed, they can be exposed to much higher risks of maternal morbidity and mortality.  Pregnancy is the leading cause of death for young women aged 15 to 19. This cohort is twice as likely to die during pregnancy and childbirth as those over 20, and girls under age 15 are five times more likely to die (UNFPA, 2003).  Babies born to adolescents are also at an elevated risk of poor health outcomes. The younger a woman is when she first gives birth, the longer her total child-bearing period and the more children she is likely to have which increases the risks to the life and health of both mothers and children.

For programs aiming to reduce maternal mortality, increase contraceptive use – particularly among married and unmarried adolescents – delay age at first marriage, and improve newborn health, this is a useful indicator for determining program impact.

Since the median is based on all women including those without a birth, there may not be a median for younger cohorts of women (since fewer than 50 percent of the cohort may have had a birth).  If fewer than 50 percent of the sample within a single age group category has given birth, the preferred form of the indicator is proportion of young women who had given birth by specified reference ages among respondents who are the reference age or older (e.g. the percentage of adolescents 16 years or older who had given birth by age 15).  Evaluators may compute median ages at first pregnancy or first intercourse in a similar fashion.

Early age at first birth in the context of marriage may in the short-term elevate a young woman’s social status as she quickly proves her “value” by producing offspring.  But early childbearing often means decreased mobility, less education to acquire skills that may enable the young woman to better care for her and her family and earn a wage, and fewer life opportunities in general.  This in turn decrease’s the young woman’s decision-making power in areas related to her own reproductive health.  Increasing the age at first birth not only positively impacts the health status of a young mother and baby, it can dramatically impact a young woman’s future from an economic, social, and emotional perspective.

Healthy Timing and Spacing of Pregnancy

Women and Girls’ Status and Empowerment