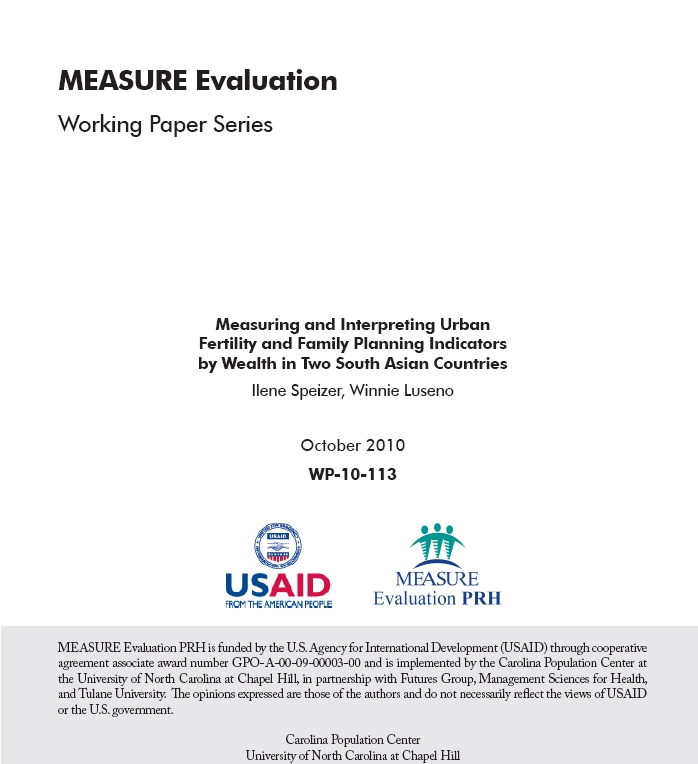 Abstract: As the population of the world becomes increasingly urban, there is a need to examine the fertility and family planning needs of urban populations, particularly among the urban poor. While it is often assumed that urban residents are better off than their rural counterparts, the reality in many settings is that the urban poor are equally disadvantaged because of over-crowding, high demand for limited resources, increased cost of services in urban settings, and lack of access to clean water and sanitation. The definition and measurement of poverty in a population has become increasingly important as reduction of poverty is identified as the first Millennium Development Goal. This study applies new approaches proposed by the MEASURE Evaluation project to classify wealth using nationally-representative surveys, such as the Demographic and Health Surveys (DHS). These approaches are particularly important in cases where identifying and targeting of services to the urban poor are of interest. Applying these new approaches to DHS data from Bangladesh and Pakistan, this paper demonstrates that the standard DHS wealth measures under-estimate the percent of the urban population that is poor and demonstrates that, using the re-classified wealth indices, women in the lowest quintiles remain worse off on fertility and family planning indicators. Even in Bangladesh, where family planning services are easily available, distinctions are still found between the urban poor and non-poor in terms of family planning method use and sources of methods. Larger differences are found in Pakistan, where programmatic efforts have been less widespread. Without reclassification of standard DHS wealth measures, programs risk misrepresenting the urban poor and may miss some of the women and households most in need of family planning services. Ensuring access to family planning among all women, men, and households, but particularly among the urban poor who lack access to some of the urban advantages available to their better-off counterparts, will lead to improved health outcomes for women and children, especially in concentrated urban areas.
Shortname: wp-10-113
Author(s): Speizer IS, Luseno W
Year: 2010
Language: English
Region(s): BANGLADESH, PAKISTAN
Filed under: Bangladesh, Family Planning, Fertility, Poverty, urban