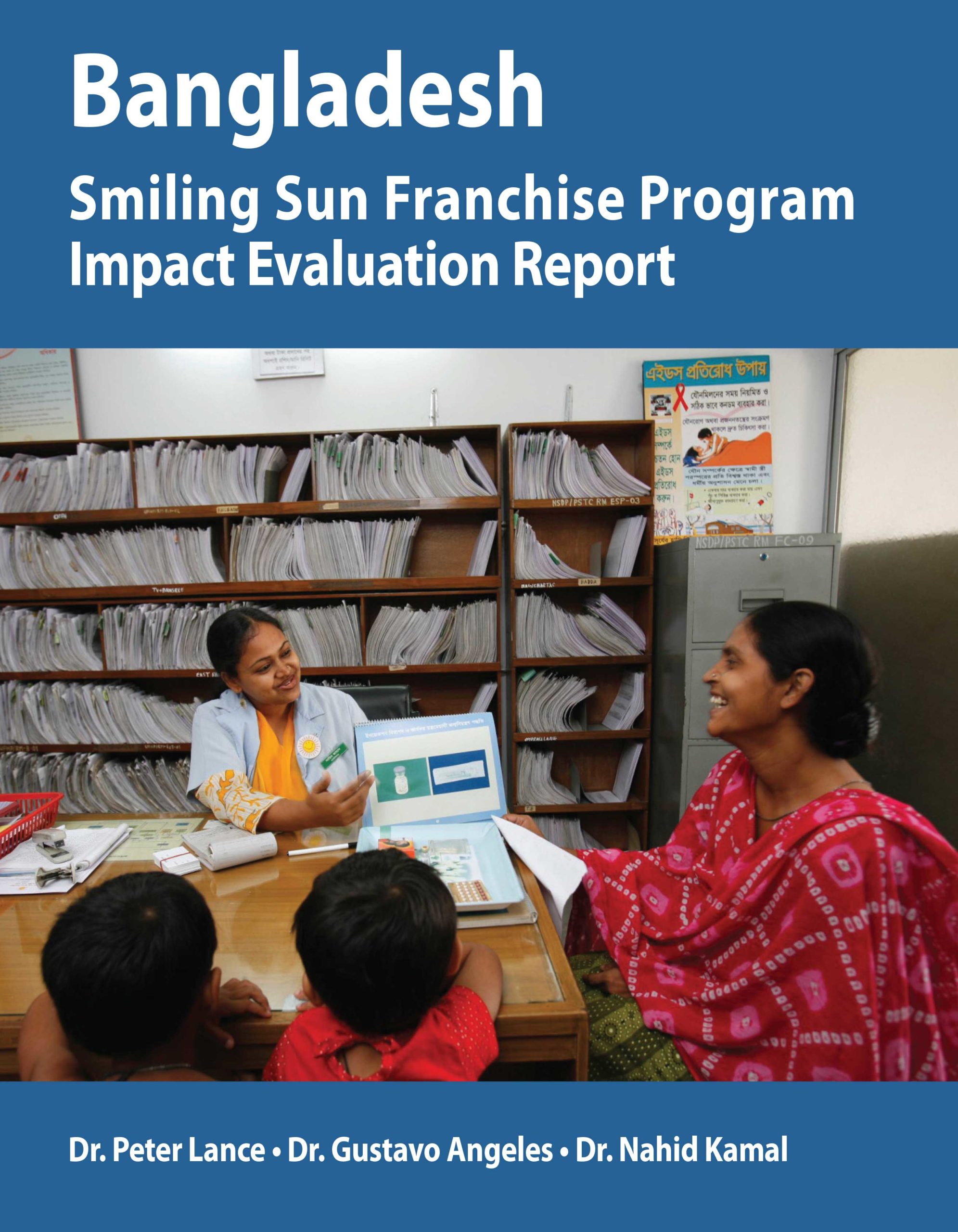 Citation: Lance P., Angeles G, Kamal N. (2012). Smiling Sun Franchise Program (BSSFP) Impact Evaluation Report. Chapel Hill, North Carolina: MEASURE Evaluation.
Abstract: The Bangladesh Smiling Sun Franchise Program (BSSFP) is a United States Agency for International Development (USAID)/Bangladesh funded health care delivery program providing a package of essential health services through a network of local non-governmental organizations (NGOs). It is a continuation of the NGO Service Delivery Program (NSDP), which had been in place in various forms since the late 1990s. BSSFP operated in areas that had been identified by the Government of Bangladesh (GOB) to have inadequate public health service delivery systems where the government sought assistance from partners to fill the service gap (henceforth referred to as project areas). USAID committed US$46 million for BSSFP over a four-year period (2007-2011). The program was later extended for another year with additional funding of around US$11 million.

The programs overall objectives were to increase the use of family planning, maternal, child, and other basic health services in areas served by BSSFP, with an emphasis on serving the poor and on improving the sustainability of local NGOs in continuing to provide these services. The program was developed at a time when funding for USAID/Bangladesh was expected to decline drastically. Thus, improving financial sustainability of local NGOs within a four-year period was a major emphasis of the program. To meet the desired outcomes, BSSFP had four objectives: (1) to develop a franchise model; (2) to recover 70 percent of operational costs by the end of the project; (3) to increase and expand quality service volume; and (4) to ensure that 30 percent of all health services provided are service contacts targeted towards the poor who are unable or only partially able to pay.

In 2010, three changes were made to the BSSFP program based on a mid-term program assessment conducted in April 2010 and USAIDs periodic program reviews. First, the program was extended for an additional year beyond its fourth year. Second, the programs cost recovery target was revised downwards to 45 percent of its operational costs. The initial target of 70 percent cost recovery was abandoned since it would have involved further increases in user fees, in addition to the two price hikes introduced in the first three years of the project. Third, further efforts to establish a franchise were ceased.

The BSSFP was implemented under a contract between USAID and Chemonics International through 26 local NGOs operating a network of 323 static clinics, around 8,800 satellite (outreach) clinics, and over 6,000 community volunteers known as Community Service Providers (CSPs)/depotholders. The BSSFP served a catchment population of roughly 20 million through 193 clinics in urban areas and 130 clinics in rural areas. The urban and rural components of the BSSFP program varied slightly in design and implementation owing to differences in urban and rural settings. The rural component of the BSSFP had a CSP/depotholder component for community mobilization but the urban one did not.
Shortname: tr-12-89
Author(s): Lance P, Angeles G, Kamal N
Year: 2012
Language: English
Region(s): BANGLADESH, South Asia
Filed under: Bangladesh, Evaluation, Health Services, Impact Evaluation, Service delivery